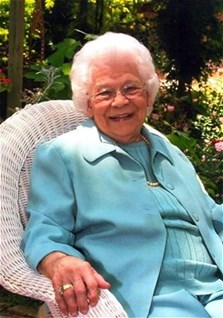 Born to Lanis and Margaret Rowland on August 20, 1916, Margaret L. Felty grew up in Paris, Texas and early on in her life the importance of education was ingrained in her mind and heart. A 1934 graduate of Paris Public Schools, she went on to attend Paris Junior College from 1934-1936. During this time, she met her husband L.T. Felty and they were married on April 17, 1936. In the fall of 1940 the family moved to Waxahachie. For many years Ms. Felty served as a home maker and “room mom” for her children’s schools. In 1956 she returned to Texas Christian University to obtain her teaching degree and graduated in 1958 with a Bachelor of Science Degree in Elementary Education. She completed her student teaching under the direction of Savola Shackelford at Ferris Ward Elementary in Waxahachie.

In January 1959, Ms. Felty began teaching second grade at Northside Elementary and remained there until 1976. During her tenure at Northside, she taught both first and second grades and became a role model for both teachers and students. Ms. Felty was instrumental in bringing the Head Start program to Waxahachie I.S.D. which enabled economically disadvantaged children to get a “head start” before enrolling in kindergarten. Her time in the classroom funneled her desire to once again go back school and in 1982, she earned a Master of Arts Degree in History from the University of Texas in Arlington. Ms. Felty’s dedication and commitment to educating all children that walked through her classroom doors influenced many to go on and become teachers themselves.

Ms. Felty was also an active philanthropist in the Waxahachie community. She was a March of Dimes volunteer for many years, a member of the Retired Teachers Association, a volunteer for Story Hour at Sims Library, an Election Judge for Ellis County and a member of the Alpha Alpha Chapter of the Delta Kappa Gamma Society among numerous others. Perhaps one of her biggest accomplishments was that as Chairman of the Ellis County Historical Commission from 1981 – 1994. Ms. Felty was instrumental in identifying numerous historical sites and during this time was responsible for placing between three and six historical markers per year in various Ellis County locations during her fourteen years of service on the commission.

The entire Felty family has long been known in Waxahachie for their belief in the importance of education and community service. Waxahachie I.S.D. is forever grateful that Margaret L. Felty continued this Legacy.